The causes, symptoms, treatments and consequences of malocclusion

In orthodontic and maxillofacial surgery clinics, the word “malocclusion” often comes up during diagnosis. But what does malocclusion mean, exactly?

In this article, find out all about the causes and symptoms of malocclusion, its treatments and the consequences it can have if left untreated.

In dental health, the term “occlusion” refers to the contact between a person’s teeth. More specifically, it refers to the way the upper and lower jaw meet when a person closes their mouth. The term “malocclusion” is used to indicate a misalignment.

The problems that cause malocclusion can be dental or skeletal in nature.

Skeletal malocclusion has more to do with the jawbones. In these cases, one of the jawbones protrudes farther forward than the other or is different in size, creating an misalignment.

Malocclusions can generally be diagnosed during routine dental exams that include taking dental x-rays to check whether the patient’s teeth are properly aligned. To get an even more accurate picture of the situation when the teeth are crooked, the patient can also be referred to a clinic that offers 3D radiology services.

If a dentist or maxillofacial surgeon finds a malocclusion, they will classify it according to type and severity. There are three major classes of malocclusions, which are categorized based on the contact between the first upper and lower molars (Angle’s classification).

With this type of malocclusion, the jawbones meet normally and the misalignment of the teeth is not severe.

A class 2 malocclusion, sometimes called retrognathism, is diagnosed when the patient’s upper jaw overhangs the lower jaw and the upper teeth are positioned farther forward than the lower teeth.

This can be caused by protruding upper front teeth or an underdeveloped lower jaw.

A class 3 malocclusion, sometimes called prognathism, is diagnosed when the patient’s lower jaw protrudes past the upper jaw and the lower teeth are positioned farther forward than the upper teeth.

This generally occurs when the lower jaw is larger than the upper jaw.

From left to right, class 3, class 1 and class 2 malocclusions

Malocclusion is a problem that is usually linked to heredity and genetics. That means that a person who has a parent with a malocclusion is more likely to have one themselves.

However, there are certain conditions and habits that can alter the shape and structure of a person’s jaw:

Depending on the type and severity of the malocclusion, the symptoms can be subtle or acute. Typical symptoms of malocclusion are:

It is important to note that epidemiological studies indicate that regardless of the type of malocclusion, it will not correct itself naturally with time and growth. In fact, most dental and skeletal malocclusion problems found in children tend to worsen over time without specialist intervention.

There are a few different ways to treat malocclusions. The best treatment should be determined based on x-rays and 3D images of the patient’s mouth.

When the problem is dental in origin, it can usually be treated effectively with fixed or removable orthodontic appliances. This type of treatment may also be appropriate for younger patients with mild skeletal malocclusions whose mouths are still growing.

Orthognathic surgery is performed to properly align the jawbones and correct more severe skeletal malocclusions. During surgery, the maxilla (upper jaw) and mandible (lower jaw) are repositioned along 3 spatial axes according to the position of the rest of the skull and facial bones.

The potential consequences of untreated malocclusions

There are a great variety of problems that can be caused by malocclusions. Some appear quickly, while others can happen in the long term.

Here are a few of the potential consequences of untreated malocclusions:

A misaligned smile is less aesthetically pleasing. For some, this can have a direct impact on self-confidence, making them reluctant to smile in public.

Malocclusions can also lead to facial asymmetry or a receding or overly pronounced chin, conditions which can affect the balance of the face and make a person feel less confident.

Severe malocclusion can cause chewing and swallowing problems. Sufferers may experience jaw pain or locking when chewing, and may even hear cracking sounds.

Misaligned teeth make it difficult to break food down into smaller pieces, which can also affect digestion.

Malocclusions can make it difficult to produce some of the sounds used in everyday speech.

Malocclusions are also associated with speech and language delays and disorders.

Malocclusions are often accompanied by overlapping, crowded teeth, which can make it more difficult to carry out basic oral hygiene at home. Therefore, malocclusion comes with an increased risk of cavities and gum disease.

Because of their malocclusion, some patients develop a habit of breathing through their mouth. As a result, they are more likely to snore or suffer from obstructive sleep apnea. Mouth breathing also promotes bacterial growth in the mouth, increasing the risk of gum disease.

Other potential consequences of malocclusion

It has been reported that some patients with malocclusions experience chronic migraines, tinnitus, back pain and posture problems.

Even though not all malocclusions need to be corrected, having misaligned teeth or jaws can have negative consequences for those afflicted.

If you are experiencing symptoms of malocclusion, contact a specialist to discuss them. The specialist will be able to propose solutions that meet your needs.

To learn more about maxillofacial surgery, we invite you to take a look at the blog section of our website.

We are not here yet. But you can send us an email and we'll get back to you as soon as possible. 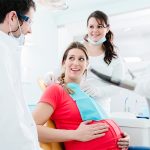 Can you have a tooth pulled during pregnancy?Uncategorized